Hangover Helper – Phở, Sinh Tố, and the Other Delights of the Eden Center

It’s noon on a Sunday, the light slowly filters in through your blinds, and you curse the copious quantity of Cristal of last night as if it was a soul-sucking vampire.  Realizing that, damn it, you may have earned a day off with that legendary party, but you’re not gonna let a whole day waste away (half is quite enough), you need something to pick you up, set you straight, and let you get on your way.

What is that something?  If you’re in the DC area, it’s a visit to the Eden Center for something like this: 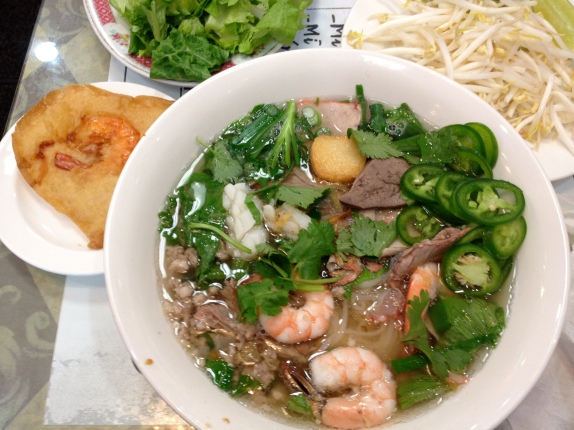 OK, so actually, that’s not phở, but rather some oddball rice noodle  soup with everything under the sun combo  (shrimp, 3 or 4 kinds of pork, squid, some other seafood, quail egg, shrimp toast…) from Hủ Tiếu Mi La Cay Chợ Lớn, the best thing for a horrible morning after is the various phở offerings at any of the venues at Eden Center.  Let’s be straight about something: this isn’t the yuppified, Columbia Heights/Dupont Circle/Chinatown $14 bowl of soup that has recently roared across the region, this is the real damn thing. Cheap, superb, and the best outside Vietnam.

So what’s Eden Center? It is the epicenter of Vietnamese life in the DC area, and one of my Happy Places.  I’m sure the secret is out by now, but it’s an enormous shopping center in Seven Corners, Falls Church, VA, modelled after a similar place in Saigon, with literally dozens if not over a hundred Vietnamese shops, restaurants, delis, salons, etc.  It’s even home to a nightclub and sketchy looking bars with tinted windows where Vietnamese men belt out the karaoke hits drinking Heinekens and 33 until late at night (I have yet to do this, but the plan is always there).  Going on a weekend afternoon will ensure difficulty parking as the place gets truly mobbed, but fight on, reader, it’s worth it.

As for phở, there are several places, among the best being the newish Phở Sapa, Phở Xe Lửa (which means “phở train”, amusingly), and my all time favorite, Hải Dương. The product at all these places is first rate (though Xe Lửa may have a slight edge), but Hải Dương has a lot going for it. It’s big, it’s busy (this is a good thing), and it has a big menu, specializing in not just great phở but also other classic North Vietnamese dishes. Want bún chả? It’s about the only place to get it.  Want bánh xèo, the delicious Vietnamese rice crêpe studded with pork, shrimp, and other goodies? They do some of the best.  Also, they take credit cards! Huzzah!

Over at Hủ Tiếu La Cay Chợ Lớn, there’s no phở but instead nearly every other kind of noodle soup imaginable, including the one posted above, and a RIDICULOUS noodles with goat curry.

Have you become hooked on bánh mì after numerous yuppie-oriented places in DC, New York, and elsewhere have flogged them for $8 a pop?  Well, good, but shame on you for paying so much!  Go to Song Que and get them for under $3.50.  Prowl around the other delis and you can find them for as low as $2.50.  Oh, and apart from being 1/3 of the price of one downtown, they’re vastly superior. Their ready made food, such as desserts and various spring rolls, is also top notch.

Song Que, and several other places, also do sinh tố, or fresh fruit smoothies as well as flavored cold milk teas with tapioca balls (aka “bubble tea”), but the best quality and friendliest service come from Saigon Bakery & Deli*, with the second best, and definitely the largest, coming from Phuoc Loc.  If you care more about the tapioca bubbles, stick to Song Que though.  They and the wide gauge straws are very good for playing blowgun in the parking lot when nobody’s looking…

It’s worth noting that while all the places mentioned so far have been very mom-and-pop and casual to the point of take-away only, there are a few proper restaurants that you could take more squeamish friends or family too, namely Viet Taste and Viet Bistro. The latter is fantastic in nice weather as it’s one of few places with outdoor seating.

Who am I kidding – as AMAZING as phở is for a hangover or a wicked cold, I come here nearly every week, recently twice in the same day.  It’s good whenever you want superbly made, good food in an authentic environment, at prices that would make Jose Andres (who I do admire greatly) cry rivers.  It’s also extremely fun to just walk around and enjoy all the sights, sounds, and smells of the place – it truly is huge: there are 2 large indoor areas as well as those with an outdoor façade, and even if you only came for the food, you could likely eat a different place each day for a month and not try each establishment.  Seven Corners may seem like a hike, but it’s sooooo worth it.

Hải Dương: Pretty much the greatest place in the universe, I’m essentially a regular here.  They have almost everything you could want, except for sandwiches. The phở is great, the other items are just as good.  Credit cards accepted ($15 minimum).

Phở Xe Lửa: Probably the best phở, and that’s all they serve.  Cash only and a bit more expensive, but god damn, is it good. Ride the train!

Song Que: The grande dame of the bakeries.  There’s usually a small queue to place an order, but it moves quickly.  The best sandwiches and takeaway food.  The smoothies are good but there’s better elsewhere.  They have seating! They also take CCs, but with a $5 minimum.

Saigon Bakery & Deli*: OK, so I’m not 100% sure this is the place, but I’m pretty positive.  There are 3 bakery-delis in a row perpendicular to Song Que, and this should be the one in the middle, next to Kim Phung.  The best and freshest smoothies, hands down, and the lady who runs the place is very nice; she recognizes me every time I come back and chats for a bit.  CCs accepted with no limit!  Yes!!! Also, open later than any other holes-in-the-wall (at least 10pm)

Viet Taste: On the inside behind the supermarket.  A proper sit-down place with a huge menu full of good stuff.  Go with a group.

Viet Bistro: Also a proper sit-down place, with outdoor seating.  Also a pretty diverse picture menu, everything is great.  This the place to take newcomers, but also nice on the terrace on a pleasant day.

For general info, head over to http://edencenter.com/ and by all means try places not on this list, I’ve been to some and have yet to explore them all, but everything here is good.

This entry was posted on January 12, 2012 by Hassouni Efendi. It was filed under DC, Food, Value and was tagged with Banh Mi, DC, Eden Center, Food, Pho, Vietnamese.