Unless you’re an ardent Francophile and love the UN and cities that close at 9pm, if you don’t have much time, skip Geneva and fly into Zürich, the largest city in the country.  While Geneva, and especially the area around it, is certainly pleasant enough, there isn’t that much going on other than a few banks and international organization, and it’s a rather quiet town.  From here no major destination in the country is more than an hour or two by train, but the city itself is lovely.  Zürich teems with life in a way not felt in other parts of Switzerland, and the town itself is an interesting mix of old and slightly newer.  Located at the head of Lake Zürich where the River Limmat enters, the old center of town has beautiful river- and lakefront promenades, perfect for having a kaffee and watching the people and the beautiful scenery, such as this:

The Limmat from above

As the river nears the lake

Looking back upriver to the city

Zürich isn’t all about its waterfront, of course.  The 19th century city centre has a grand, slightly imperial feel to it, while the historic center (16th-18th century or so) feels like a proper old Medieval village, except with boutiques selling everything from watches to Italian shoes to cutting edge outdoor gear.  As one of the centres of the Reformation, Zürich is also notable for its old churches, most notably the Fraumünster (left side of above picture), and the Grossmünster, (right side), dating from the 11th and 12th centuries.  The Fraumünster increased its fame in recent decades by replacing its main panel of stained glass windows with ones created by famed modern artist Marc Chagall in 1967, visible here:

Photography not allowed inside - thanks, Wikipedia!

Honestly though, the main thing to do in any Swiss town or city is simply to walk around.  Most places are very old and have a genuine antique charm to them, and are small enough that an hour or two’s stroll around will show you all the sites.  Nowhere is this more true than:

Kapellbrücke in front of Pilatus, Luzern

Also known as Lucerne in English or French.  The picture above represents much of what makes this city so attractive – its lakeside location, at the head of the Vierwaldstättersee, or Lake Lucerne, surrounded by tall mountains, most prominently Pilatus, lit by Alpenglow above, and the extremely attractive and well-preserved Medieval town centre, of which the 14th century covered Kapellbrücke, or Chapel Bridge, is the most famous landmark.  While there are  few token museums and churches and other such sights, the main thing to do in Luzern is to walk around and take in the view, and what a view – Luzern is generally considered the most touristed place in Switzerland, and for good reason.  Just look at the following pictures, all taken within a 10 minute walk of the Kapellbrücke.

Flag-thrower in the old town

Alphorn players in front of the Rathaus (town hall)

View of the Vierwaldstättersee and surrounding mountains

Lakeside on the quay looking back at the town

Kapellbrücke and Franciscan church at night

Ducks and incredible clarity, hallmarks of a Swiss body of water

One of many town squares

Right around the corner

The Löwendenkmal, Lion Monument, carved into the cliffside to commemorate the death of Swiss Guards from Luzern at the French court during the French Revolution

View over the town from up near the city walls 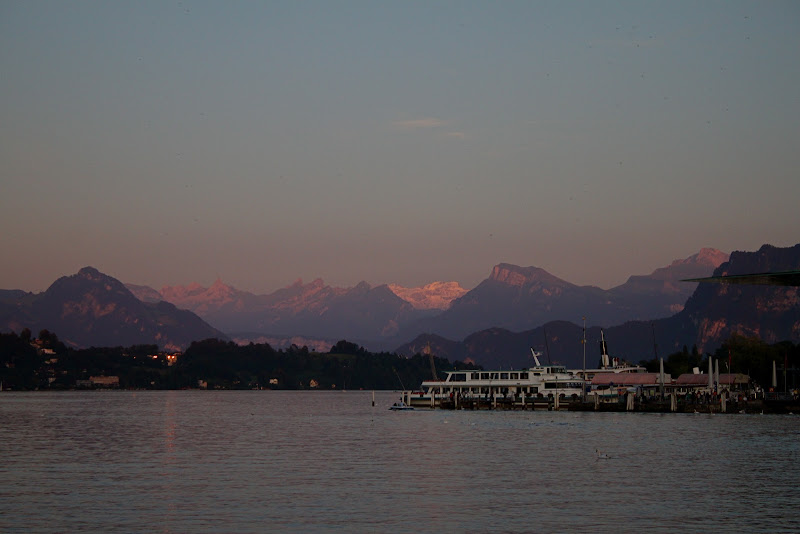 This is rather appropriately called Alpenglow

Lucerne is also home to some great hotels and eateries/place to drink.   I stayed at and can heartily recommend the Hotel Continental-Park, on the newer side of town just a minute from the train station and bridge to the old town.  Also recommended is the hotel’s restaurant, Bellini, specializing in cuisine from Ticino, the Italian part of Switzerland.  Some of the best ice cream I’ve ever had was in Luzern, at Bachmann (locations all over town), and what appears to be the best beer in Switzerland is brewed and served at the Rathaus Bräuerei, located underneath the town hall, right on the river.  Next door, at the Zunfthausrestaurant Pfistern, lots of good traditional Swiss food can be had, but the best thing is the superlative bread and cheese, good enough to make a meal out of with a half liter of Erdinger Dunkelweizen (German).  Its sister restaurant, Opus, situated on the opposite riverbank, has a more Italian/Mediterranean focus, with a superb antipasti bar and a rather smashing bouillabaisse.

One of the best things to do around Luzern, besides marvel at the town, eat delicious ice cream, and buy at watch at the amusingly named Christ Uhren & Schmuck is to take a boat cruise on the Vierwaldstättersee.  Numerous cruise options are offered; I went on one lasting about 3 hours:

The water really is that green

The other major thing to do is to take the world’s steepest railway up to the top of Pilatus, roughly 7000 feet (2000ish metres).  This is done by driving, taking a train, or indeed taking a boat to the tiny hamlet of Alpnachstad, whence the train departs.  It takes about half an hour to get up, and the views from the train as well as from the top of the mountain are stunning: 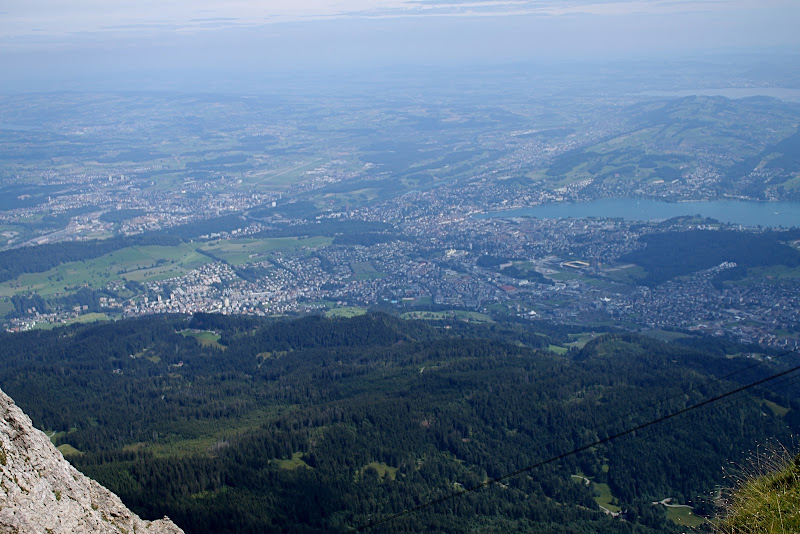 View of the main level on Pilatus from 16 stories up

The cable car back to Luzern, the Most Baller way down

And the history of said steepest railway

A final thought – while I said Luzern is the among the most, if not the most visited cities in Switzerland, this in no way detracts from its charm.  Nothing feels like a tourist trap, everything feels authentic, nothing is cheesy or overdone.  Although there are tourists everywhere, a lot of the people at the same places you might be eating, drinking, or riding a boat are either locals or other Swiss, as well as tourists.  Disneyland this most certainly is not.  This is a Good Thing.  That’s pretty much it for the Luzern area and this post.  More of Switzerland coming soon.