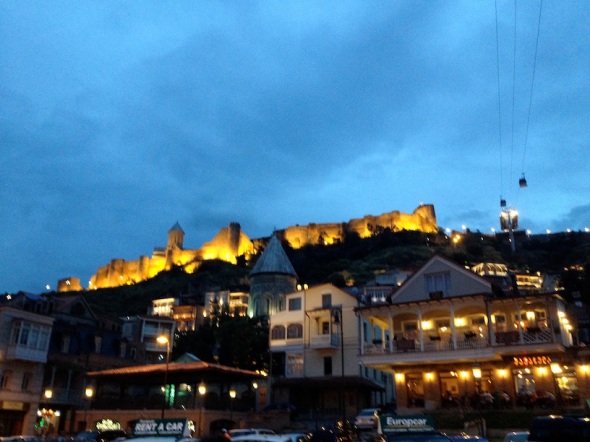 But I want to change that. Georgia is a lovely, remarkable country, with an ancient and distinctive history and culture, some of the most beautiful scenery I’ve set eyes on, and people that give even Arabs a run for the money in the hospitality department. Let’s not forget that the food and wine are brilliant and plentiful, too.

So what and where is Georgia?  It’s a nation that’s existed in various forms for a couple thousand years, with a native people who have held on to their identity for even longer, despite centuries of rule by Persians, Russians, Turks, and whoever else you care to throw in.  Sandwiched between the Black Sea, Armenia, Turkey, Azerbaijan, and over the mighty Caucasus mountains, Russia, elements of its neighbors are present but the country remains resolutely sui generis.  They are the second oldest Christian nation in the world, have their own unique language and alphabet, all of which form a major part of their distinctive culture, of which Georgians are justifiably proud.

What else? Georgians are possibly the most welcoming and hospitable people I’ve ever come across, and that says something.  Meet a Georgian and you will be invited to their home, and it won’t be a hollow invitation.  You’ll be wined and dined at the last minute as if it’s a special celebration, all the while hearing apologies at the supposedly meager offering – possibly after you’ve eaten and drank more than you previously thought reasonable.  You’ll be shown around and helped out, as a stranger in a strange land, more than you can imagine, to the point where you feel profoundly grateful.  All of this comes with an attitude of “it’s nothing, you’re so welcome!”  It’s often said by Georgians that they consider guests a blessing, but it’s you that ends up feeling blessed by such genuine warmth. 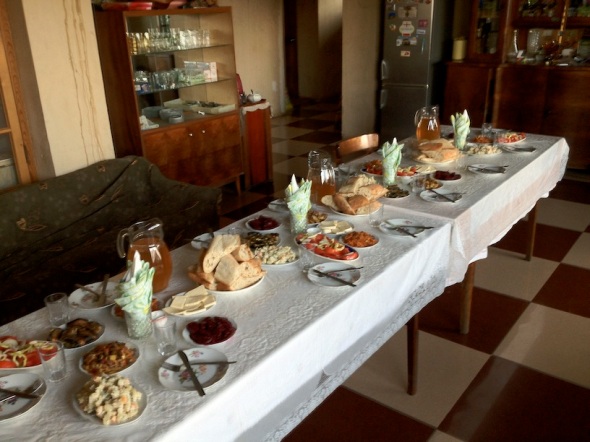 If you saw the previous post on Georgia, you saw what a jaw-droppingly beautiful country it is.  At almost every new curve in the road, a photo opportunity presented itself.  The Caucasus are magnificent – the highest mountains in Europe, a slightly taller, far less developed Switzerland, but also far more sparsely populated, despite populations in place for thousands of years. Major highways feature frequent cow crossings before deteriorating into jeep tracks when the elevation climbs. 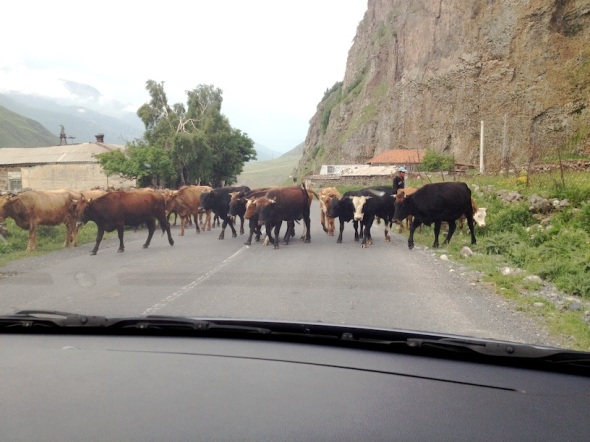 Reverting to US state references, West Virginia calls itself “wild and wonderful,” but that applies to Georgia tenfold.  But it’s not just the high mountains that get all the wows.  The vast majority of the country, peaks or none, is gorgeous.  From the forests and streams of the Borjomi-Bakuriani area, to the open wine country of the Alazani valley, to the desolate, nearly uninhabited windswept semi-steppe of the far south, near the Azerbaijani border – all of it is stunning. 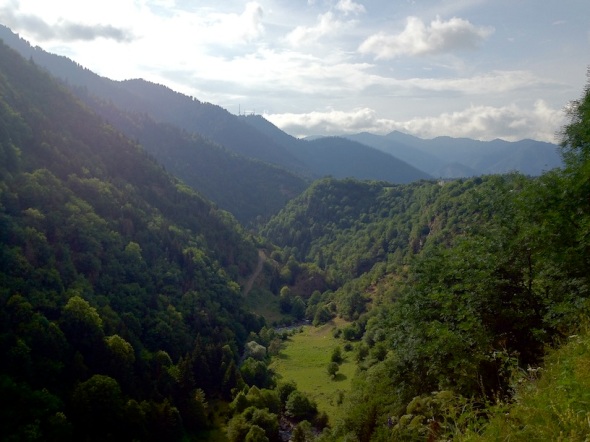 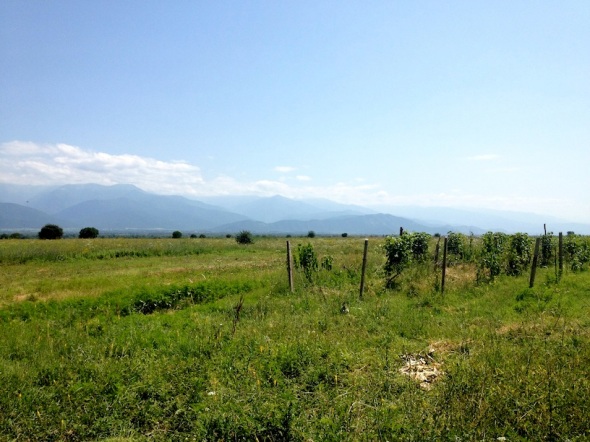 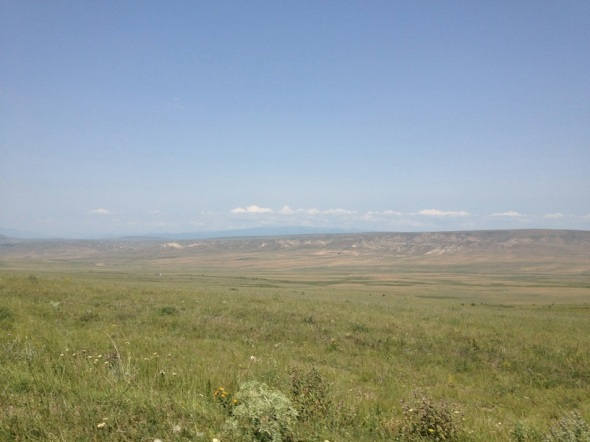 Speaking of wine, Georgia essentially invented it.  The oldest evidence for wine production is there, and traditional wine is still made according to thousands-of-years-old methods, quite often at home.  At every lunch or dinner eaten at someone’s house, homemade wine is served – refreshing and easy to drink – sometimes too easy! Many of Georgia’s commercial vineyards have begun producing with European methods, also turning out excellent drops, but some have decided to stick to their roots and only make traditional styles (more on this in a later post).  Wine, and toasting, is an integral part of Georgian culture, even playing a part in Georgia’s conversion to Christianity.  Fortunately for the traveller, at even the best and priciest restaurants, a bottle of excellent local wine is quite reasonably priced.

And with wine comes food, of which Georgians are proud, and it’s easy to see why. Everything served is incredibly fresh, as if it just came from the farm that morning (in many cases it most likely did) – nowhere have I tasted better tomatoes (how I miss them!). Bread is taken very seriously, and is always served not-far removed from the tandoor-like oven. Despite the immense culinary influence in the region of its neighbors Turkey and Iran (Georgia was a part of numerous Persian empires), Georgian food remains unique, with dishes and preparations found nowhere else.  The great staple is khachapuri, bread baked with cheese inside, closely followed by khinkali, enormous, messy, and delicious brothy meat dumplings.  But you’ll also have at every meal a salad of tomatoes and cucumbers, which, despite the repetitiveness, always remains a delight due to its freshness, as well as numerous other simple sounding but astonishingly good dishes. 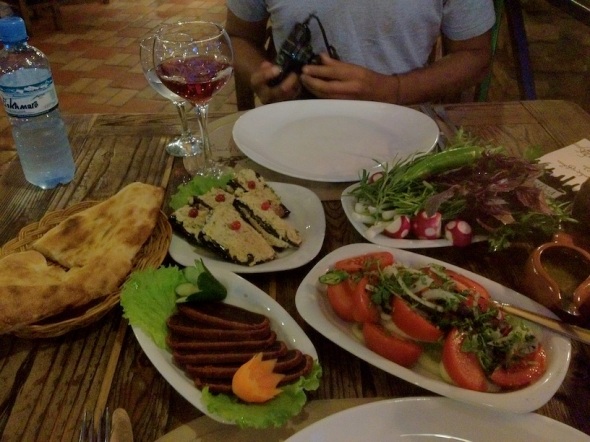 Delicious food and wine in Tbilisi (note the tomatoes)

The meat deserves special mention.  Made into all shapes: khinkali, stews, sausages, baked into bread, the best form of all is mtsvadi, known to Russians and Central Asians as shashlik, and to most of the rest of the world as kabab.  All it is is cubes of meat, usually pork or beef, but sometimes lamb, with the barest of seasonings, grilled over a wood fire, traditionally lit from dry grapevines.  Sounds simple, and it is, but it’s unlike grilled meat anywhere else.  The meat, which is undoubtably fresher than anything you’re used to, tastes so intensely of the essence of its animal.  The pork tastes porkier, the lamb lambier – it’s the platonic ideal of meat, and another of the great staples of Georgian cuisine. 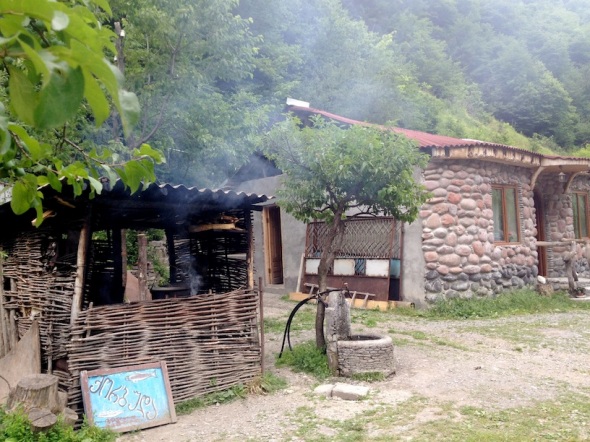 On the menu: grilled meat and fish, khinkali, beer, and not much else, but who cares when it’s that good?

In the midst of all this is Georgia’s own direction 20+ years on since the fall of the Soviet Union, and only 9 since the so-called Rose Revolution.  Georgia is slowly modernizing: Tbilisi, especially the old town, is a lovely city and extremely tourist-friendly, with wifi everywhere, smart, modern, cafes, and a younger generation well-skilled in English.  Despite the immense language barrier in the country as a whole, in many parts of Tbilisi this wasn’t a problem at all.  This side of the country is happily moving through the 21st century, keeping modern while also keeping very proudly Georgian. 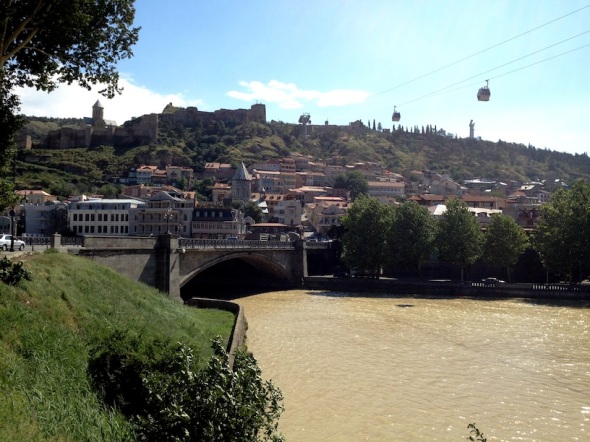 The old town from across the Mtkvari River 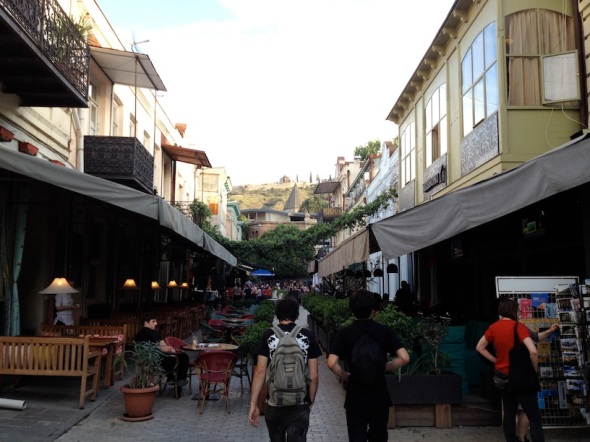 Erekle II Street, in the heart of the old town

However, much new development has come at the expense of neglecting the old and frankly more interesting.  Massive construction projects abound in Tbilisi and elsewhere, sometimes building new steel-and-glass monuments to modernism, sometimes spiffing up derelict areas.  But said renovation seems selective – much of the old town looks like it’s falling apart. Outside the capital, new development is slow to nonexistent except in a few areas.  This results in loads of character, but one wonders how the residents must feel. 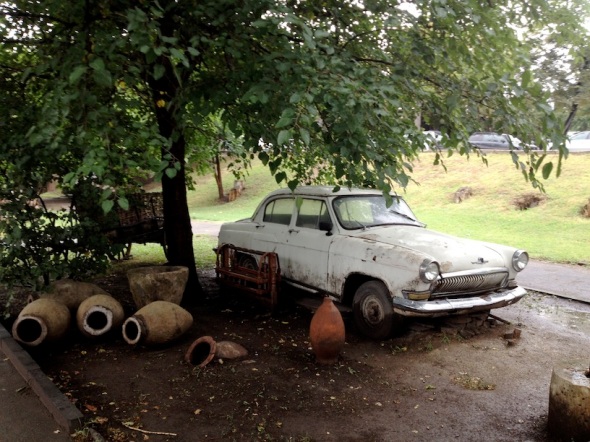 Preserving the past? Ancient wine jars (qvevri), and nearly as ancient Soviet clunker

But with everything Georgia has going for it, as a visitor you really won’t care. It’s an amazing place, in all aspects – a true WBH-worthy destination, and to all the wonderful Georgians I met, didi gmadloba!

This entry was posted on July 11, 2012 by Hassouni Efendi. It was filed under Georgia, Travel and was tagged with Caucasus, Food, Georgia, Mountains, Tbilisi, Travel, wine.