It’s official – he wanted to be a legend, and he is. Usain Bolt just won the world’s first Olympic running triple-triple (or is it double triple?), part of the mighty Team Jamaica – Nesta Carter, Michael Frater, Yohan “The Beast” Blake, and Usain “Lightning” Bolt – that won the 4x100m relay today, setting a new, smashing world record of 36.84 seconds, a mere two days after Bolt became the first ever to get a double-double by winning the 200m. But this time, he had help from the rest of Team Jamaica, overall the fastest sprinters in the world. What an irie first week of Jamaica’s 50th independent year! It’s only fitting to keep the party going, so get out your Red Stripe, Ting, curry goat, and whatever else you want and have a good time! 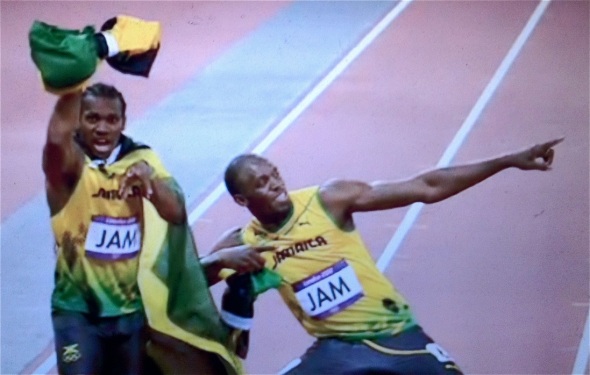 Yohan the Beast and the Lightning Bolt

It’s also the 50th anniversary, more or less, of Jamaica’s explosion onto the global music arena, and the two are no coincidence. What will be presented over several installments is a rough guide to the many styles that have gone on to influence musicians, rebels, and parties everywhere in the world since then – ska and the sound systems, rock steady, toasting (arguably the roots of rap) reggae in all its forms, dub, and dancehall, to be selective. You’ll get some brief history and description, but most imporantly, tons of fantastic music.

In 1962, the music of Jamaican independence parties was ska (yes, the genre that influenced everyone from The Specials to No Doubt to Sublime). But before ska, there was mento, an indigenous, rustic, acoustic Jamaican folk music of sorts which had been on the island for quite a while. It’s pretty good stuff:

Meanwhile, throughout the 1940s and 50s, urban Jamaicans heavily favored American sounds – jazz, hot R&B, and jump blues, records of which were brought into Jamaica in spades, and which Jamaican radios could pick up broadcast from New Orleans. Enterprising men, such as Clement “Coxsone” Dodd, Duke Reid, and Prince Buster created the now famous “sound systems” – trucks with turntables to play American records, and heaps of speakers, which used to engage in battles with each other, parked on opposite sides of a lot – whoever gathered more dancers won. In a way, this was one of the beginnings of modern DJ culture.

Towards the end of the 50s and start of the 60s, this music waned in popularity stateside, and the sound system men began to produce their own records, recruiting musicians who combined the favored American influences combined with the native mento rhythms. (Coxsone Dodd’s “Downbeat” and Duke Reid’s “Trojan” sound systems eventually sprouted the major record labels Studio One and Treasure Isle, and later, Trojan Records.)

Possibly the great fusion point, the start of it all, was the Folkes Brothers’ “Oh Carolina”, produced by Prince Buster, and featuring the Rastafarian Niyabinghi drumming of Count Ossie, whose rhythms were a third great influence on future Jamaican music:

(later covered by Shaggy, among many others)

However, the sound continued to be further refined, in the process creating ska – an upbeat, fast-paced orchestral dance music revolving around persistent off-beat guitar and piano rhythms, tight rhythm, and jazzy horns. Many songs were instrumental only, but many others featured charismatic singers who later became superstars on the island and pivotal figures in the development of Jamaican music. This all coincided more or less with Jamaican independence in 1962, and ska portrayed the excited, ecstatic sentiments of the island through its sound:

A few other greats of the era, among many, were Prince Buster, also a singer, Alton Ellis, and Desmond Dekker, who later reached superstardom.

“King of Ska” by Desmond Dekker

Due to the increasing number of Jamaican immigrants in the UK, ska became very popular among a certain sector in Britain. Largely thanks to the English Blue Beat Records, which licensed and distributed Jamaican recordings – notably by Prince Buster – ska joined R&B as the music of choice for the emergent British Mod scene, as well as the earliest skinheads (who contrary to popular opinion, were a very tolerant group), who called the sound “bluebeat.”

At the 1964 World’s Fair in New York, Ska was introduced to the world by Jamaica’s exhibition, and it, and its unique dance, the skank, became something of a global craze. Skanking, sometimes vaguely like running in place, but with more arm movement, can be seen in an entertaining short documentary from the same year, This is Ska (in 4 parts):

Despite the optimism of 1962, this era saw the rise of rude boys (rudies), disaffected Kingston youth who dressed sharply and turned to often violent crime. While it was a significant social problem, it inspired a major theme that persisted throughout the 1960s and beyond in Jamaican music, and shouldn’t be overlooked:

“Gunmen Coming to Town” by the Heptones

“Rudy, a Message to You” by Dandy Livingstone

“Rudie Bam Bam” by the Clarendonians

Of course, any discussion of ska needs to address The Skatalites – often considered the founders of the genre. Even if they didn’t call themselves that until 1964, core band members Roland Alphonso, Tommy McCook, Desmond Drummer, Jackie Mittoo, and others began playing with each other since the late 50s. They played backup for singers on a countless number of songs on numerous record labels, providing music for a wide range of vocalists:

“Simmer Down” by the Wailers – as in Bob Marley. (That’s him on lead vocal)

“King of Kings” by Prince Buster

But the Skatalites were also a supremely skilled instrumental band with a jazzy touch; their best songs beings ones they wrote and performed under their own name, without any vocalists. The crème de la crème:

Foundation Ska by the Skatalites, as if it needs further explanation given the above

Trojan Box Set: Ska 3 CDs worth of first-wave Jamaican ska, from the biggest label in the game