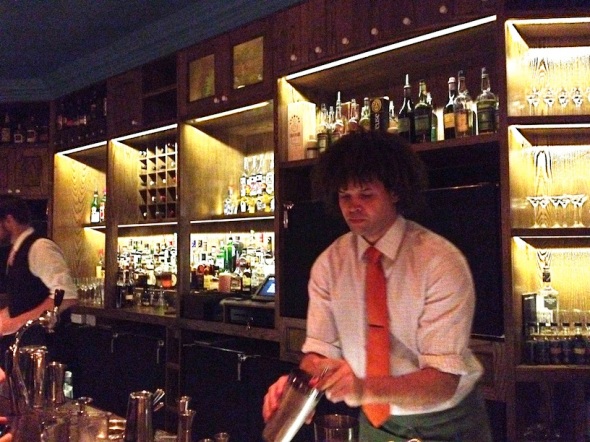 This may be the hardest such bar to find – its entrance on 225 Avenue B looks like a service entrance or portal to a crummy cluster of apartments. Once ascended to the second floor, it’s obvious this is no such thing. Pouring Ribbons occupies a surprisingly large space, with a huge bar and numerous seating options. The interior design is almost reminiscent of a classic wood-lined pub or tavern, but with a slightly sleeker vibe.

That said, I sat at the bar, as you should too in a place like this – both to see what the bartender is doing to and to engage him – ours turned out to be very friendly and a great guide to the menu.

But let’s get down to business: the drinks themselves. Boasting a longer original-concoctions list than I’ve seen anywhere, this is the stuff to get, everything from the wonderfully refreshing Death & Taxes (gin, lemon, blue plum brandy, lavender infused vermouth, grapefruit bitters) to the exotic and alluring Surabaya Sling (with its “exotic spice” syrup) to the popular and unusual One Level Up (campari, pisco, and egg white, among other things), with its layers and froth.

A Spirit of Diplomacy and a Surabaya Sling being poured

Needless to say, the drinks are delicious, funky, and original. They seem less like riffs on classics than some new form of playful alchemy.  What makes everything more interesting, though, is that Pouring Ribbons classifies its drinks according to a flavor matrix. Each drink is numbered, and below its description lie two lines, one that has “spirituous” at one end at “refreshing” at the other, while the other goes from “comforting” to “adventurous”.  The drink’s flavor and character are then marked along those two lines. Even more useful, at the start of the menu, the entire matrix is presented,so you can either pick based on your mood, or see where the drink you’re interested in falls in relation to everything else on offer. 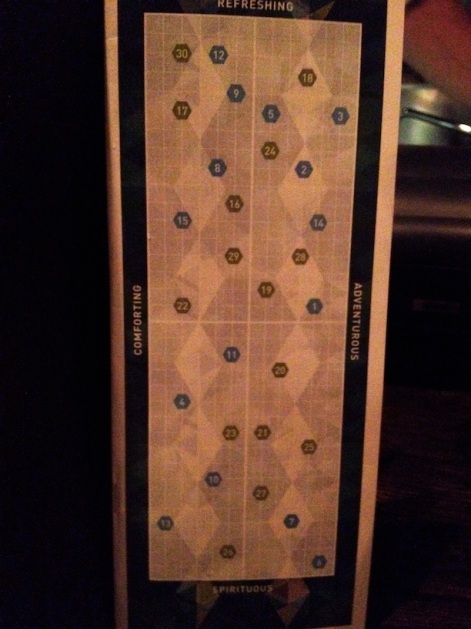 It’s a novel concept, yet one that works very well indeed, setting it apart from other establishments. I wish Pouring Ribbons great success, but I’m sure it won’t have much trouble.

Updated to add: Serious Eats has written a First Look review of Pouring Ribbons  a day after this post. WBH has foresight!

This entry was posted on September 26, 2012 by Hassouni Efendi. It was filed under Bars, Cocktails, Drinks, New York and was tagged with Bars, Drinks, Mixology, New York.