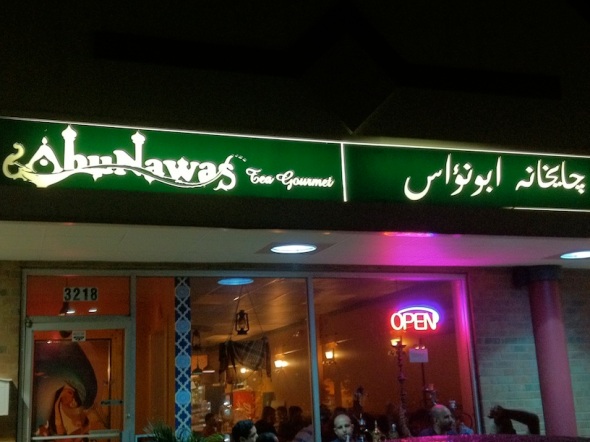 The post I just made about Iraqi tea was a necessary precedent for something I’m very excited to share with you.  There is now an IRAQI TEAHOUSE (Chaikhana) IN THE DC AREA. Abu Nawas Tea Gourmet, in Fairfax. OK, so it’s in Fairfax, but everything good and ethnic in DC is in the suburbs for the most part (case in point, it’s in the same shopping center as Bon Chon, home of the best fried chicken in the universe, no arguments allowed).

Read on to see why it’s so special:

END_OF_DOCUMENT_TOKEN_TO_BE_REPLACED

Quick quiz, loyal readers (why by now ought to ball quite hard indeed): what was the first proper We Ball Harder post?

It was Tea: an Introduction.  Now, nearly a year later, it’s time to get specific, to talk about the most badass, caffeine-straight-to-the-veins, hard-wired psycho-strength tea out there: Iraqi style tea, chai, as found on the streets of Baghdad and in Iraqi restaurants, cafes, and households worldwide.

A steaming glass of awesome